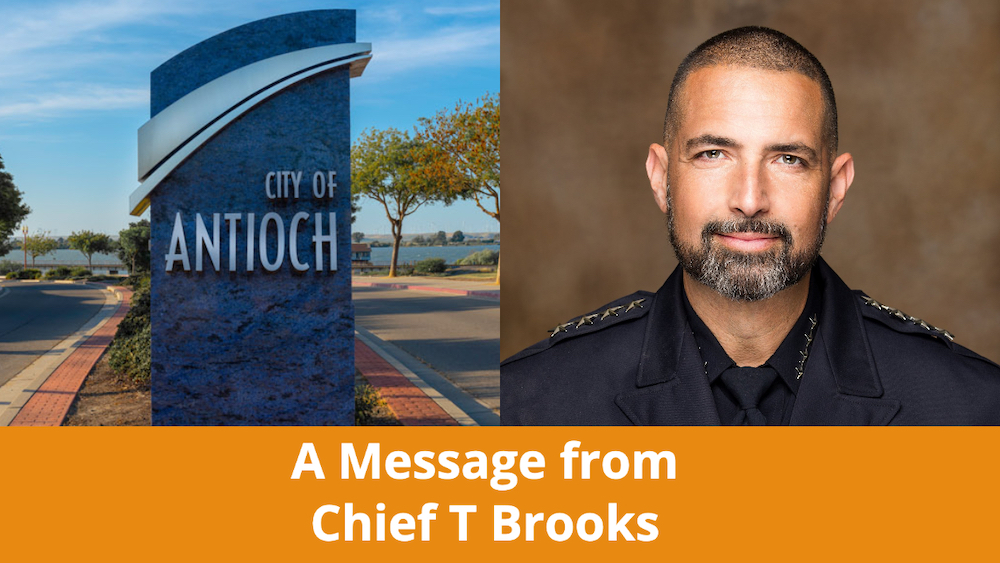 In the past few days I have received numerous inquiries from the media and the public regarding a national campaign called 8 Can’t Wait. As such, I wanted to provide some clarifying information so our community can be more informed on the reality of how our current policy compares to the recommendations made by the 8 Can’t Wait campaign. I will also explain why I do not believe at this time it would be prudent to follow all eight of the recommendations.

Three things I want you to consider before I go through each of the 8 Can’t Wait recommendations:

Now let’s look at each 8 Can’t Wait recommendation, and whether it is currently in use at the Antioch Police Department:

De-Escalation Requirement: Yes
This recommendation, while not directly articulated, is part of the legal standard for all California police departments. SB 230 requires that “officers utilize de-escalation techniques, crisis intervention tactics, and other alternatives to force when feasible.

Use of Force Continuum: No
The use of force continuum is an outdated model that has proved impractical, even dangerous, when applied in real life situations. Instead, our policy focuses on various factors used to determine the reasonableness of force in any situation, as set forth in the training and policy requirements of SB 230.

Restrict Chokeholds and Strangleholds (including carotid restraint): Yes
During my 25 years here at APD, chokeholds and strangleholds have never been authorized uses of force. However, our current policy as seen on our website allows for the use of the carotid restraint. However, Last Friday, Governor Newsom instructed California POST to cease training officers in its use and stated he intended to sign pending legislation that would ban its use throughout the entire state. Because of this, I have already issued a departmental directive, immediately prohibiting the use of the carotid restraint by our officers. This will be formally documented in an upcoming update to our use of force policy.

Require Officers to give verbal warning when possible before using deadly force: Yes
This is already included in our current policy in section 300.4, and reads, “Where feasible, the officer shall, prior to the use of force, make reasonable efforts to identify themselves as a peace officer and to warn that deadly force may be used, unless the officer has objectively reasonable grounds to believe the person is aware of those facts.”

Prohibit Officers from shooting at people in moving vehicles: No
I do not believe outright prohibitions in all circumstances is reasonable or accounts for situations where the driver of a vehicle may be threatening death or great bodily injury to others. Section 300.4.1 of our current policy already limits when an officer can shoot at a moving vehicle. It reads, “Officers should move out of the path of an approaching vehicle instead of discharging their firearm at the vehicle or any of its occupants. An officer should only discharge a firearm at a moving vehicle or its occupants when the officer reasonably believes there are no other reasonable means available to avert the threat of the vehicle, or if deadly force other than the vehicle is directed at the officer or others.”

Require Officers to exhaust all other reasonable alternatives before using deadly force: No
This language was previously suggested in AB 392, but was removed due to its ambiguity, no clearly defined means of objectively deciding what other alternatives might be reasonable in every situation, and concerns associated with the second-guessing of split-second decisions with the benefit of hindsight 20/20. Officers’ decisions concerning any use of force alternatives should be judged based on the totality of the circumstances and reasonable officer standard in AB 392.

Require Officers to intervene: Yes
This is already in our current policy in section 300.2.1, and reads, “Any officer present and observing another officer using force that is clearly beyond that which is objectively reasonable under the circumstances shall, when in a position to do so, intercede to prevent the use of unreasonable force. An officer who observes another employee use force that exceeds the degree of force permitted by law should promptly report these observations to a supervisor.”

The Antioch Police Department takes great pride in serving our community with integrity and compassion. As I have previously mentioned, our officers undergo continuous training, covering topics such as proper use of force, fair and impartial policing, interpersonal communications, crisis intervention training, and de-escalation techniques.

These types of trainings have helped us minimize the need to use force in many situations. In 2019, Antioch Police Officers responded to more than 94,600 calls for service – of which, only 0.1% required a use of force. As noted in our current policy, each reportable use of force is tracked in a system called Blue Team, and reviewed and evaluated by a supervisor and members of my command staff to ensure the use of force (and circumstances surrounding it) are in legal compliance and within policy.

I hope this helped answer any questions you may have had.