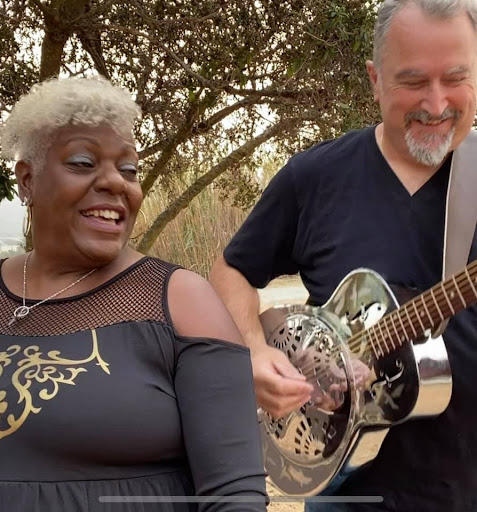 Our Lobby Series continues with the incomparable Tia Carroll & Frankie G! The blues are certainly alive and well in 2022, so let the voice of the Female Blues Vocalist of the Year, Tia Carroll, and the blistering guitar & vocals of Delta Blues Festival star Frankie G cure what ails you in this memorable dual musical event.

ABOUT THE ARTISTS:
Two popular Bay Area performers come together for a Celebration of the Best of the Blues. TIA CARROLL is a ‘Female Blues Vocalist of the Year’ and ‘Delta Blues Star’ FRANKIE G is known for his blistering Guitar & Vocals. Together, they turn a musical afternoon into a musical Event!

Born and raised in Richmond, CA, TIA CARROLL started out as a Rock and Roll singer with a band called Yakety Yak. Over the years, she has quietly accumulated one of the most impressive entertainment resumes in the Bay Area and has become one of the most sought-after female singers on the West Coast. She has headlined venues and festivals all over the world, shared stages with legends including Ray Charles and Jimmy McCracklin, and opened for Gladys Knight, Patti LaBelle, and Tower of Power.

Tia has toured throughout South America and through Canada, France, Spain and Italy where she was featured at the Jazzkarr festival in Tallinn Estonia and Switzerland at The Lucerne Blues Festival. She was nominated “Best Traditional Blues Woman” by the Jus Blues Music Foundation and awarded “Female Blues Vocalist of The Year” by the West Coast Blues Hall Of Fame.

Frank Giovanni (“Frankie G”) has been a blues guitar player in Antioch for more than 20 years. He headed up the East Bay band Killin’ Floor for 9 years. Many festivals made Killin’ Floor an annual staple in their line up for the crowd-pleasing talent of Frankie G. Emotional and passionate in style, Frankie holds nothing back when he performs. Influenced by the likes of Freddie King, SRV, Eric Clapton and Johnny Winter, his own style shines through with power and distinction.

His heart is as big as his talent. After fellow blues player and friend David Williamson started the Delta Blues Festival, Frankie picked up producing the annual event which raises money for scholarships to students. So far, the Festival has raised more than $50,000.