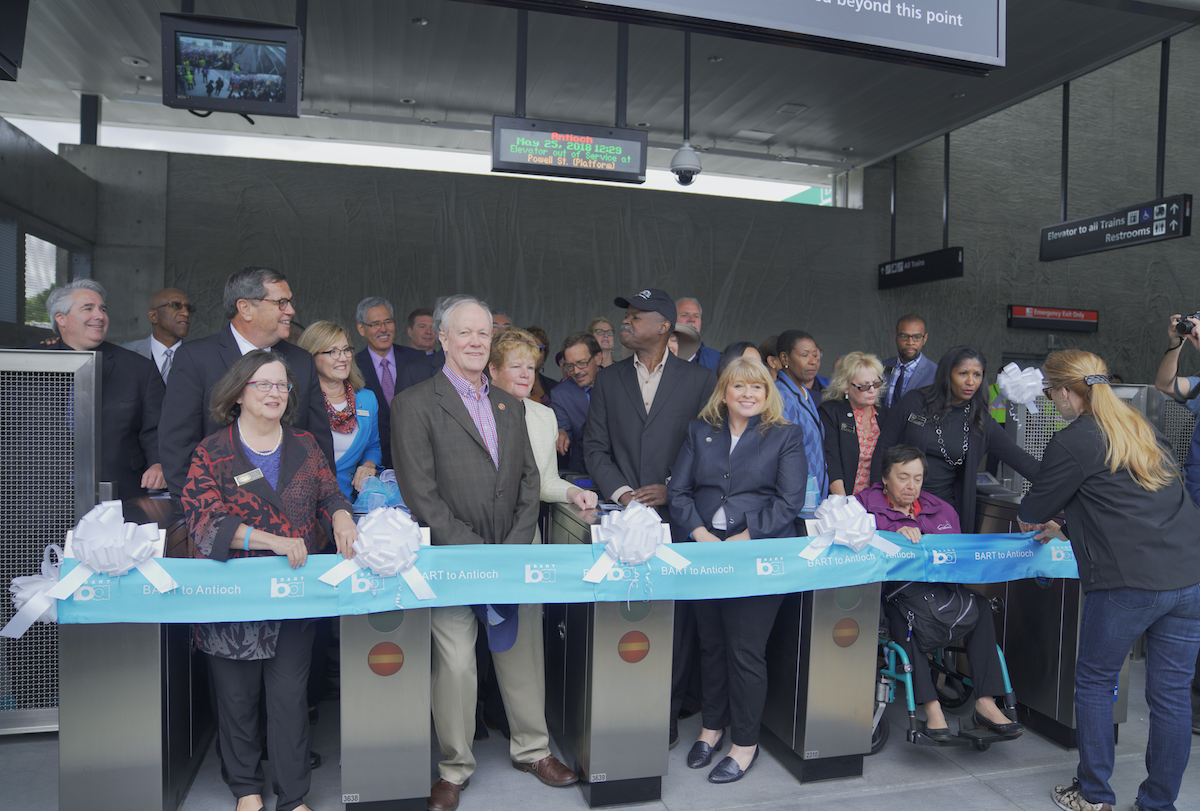 Almost 50 years in the making BART to Antioch is ready to roll. Along with a large number of elected officials and dignitaries, Antioch City Manager, Ron Bernal attended the Hillcrest BART Station Ribbon Cutting Ceremony where speeches were made and free preview rides on the new BART to Antioch Diesel Multiple Unit (DMU) trains were provided. The BART to Antioch extension officially begins carrying passengers on Saturday, May 26th. It was an historic day for the City and gives our community direct access to the rest of the Bay Area. Equally as important is the economic development stimulus this asset will provide as we continue our efforts to attract business and industry to our region.

Antioch BART Station will open for passenger service on Saturday, May 26, 2018. New service is fast, clean, and comfortable. The service between the Pittsburg/Bay Point Station and Antioch is 10 miles long and adds two new stations. The extension will be able to carry an estimated 2,400 people in each direction, per hour, during rush hours. “This is a new dawn for transit in this part of the Bay Area,” said BART Director Joel Keller, who serves East Contra Costa County and led efforts to bring the extension to the region. “Making this visionary project a reality took the long-term dedication of East County residents, and the commitment of many local, regional, state, and federal leaders.” BART to Antioch is part of the Highway 4 Widening Project, which expanded Highway 4 between Pittsburg and Brentwood. The $525 million cost of the extension is about half of the $1 billion cost estimated for extending BART’s traditional electric-powered line.

Quiet DMU trains offer a smooth ride The extension marks the first time BART is using Diesel Multiple Units or DMU train cars. They meet the US Government’s strictest emissions standards and use renewable diesel, an advanced biofuel produced from bio-based sources such as vegetable oil. The DMUs run on their own tracks in the median of State Route 4 and connect with the existing BART system at a Transfer Platform just east of the Pittsburg Bay Point Station. At the Transfer Platform, riders exit one train and walk across the platform to board the other train. BART passengers trying to reach the Pittsburg Center Station or the Antioch Station will remain in the BART train to reach the Transfer Platform. The Transfer Platform is only reachable by train. The trains boast a variety of amenities including digital signs, automated audio announcements, and modern climate control systems for those hot summer months.

Antioch BART, 1st day for Commuters
For community events in Antioch, check out our events page.

Grand Opening of Coal Mine Exhibit

Sightings of Black Bears: How to Keep Stay Safe

Protecting Antioch Community During the Drought

We are inviting residents ages 18-24 to learn whil

As most are aware, there were confirmed sightings

Do you know an individual, nonprofit, government p

Contra Costa Water District offers a variety of in

In observance of Memorial Day, City Hall will be c

Enroll in AutoPay for your City of Antioch water b

The @deltaveterans invites you to the Memorial Day